Tactical Flashlights – The Choice For Military, Police and Outdoorsmen

Ever since the concept was first introduced in or around the 1930’s, the use of tactical flashlights to aid the police and military in identifying targets before firing has saved countless lives and made the jobs of soldiers and officers much easier.

Though now commonplace, when the use of these lights was first introduced it was a major tactical innovation. In the years since, tactical lighting has evolved greatly and now a variety of bulb, battery, and case technologies allow for one-handed or hands-free lighting in a number of greatly differing tactical situations. 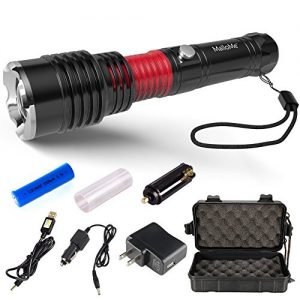 The original innovators of the tactical flashlight were police departments who needed an easy way to correctly identify suspects in low-light situations while still being able to fire a gun if necessary. Specialized tactical flashlights were developed that could easily be held along with a firearm, allowing officers to see clearly whatever the gun was pointed at. As tactical gear has improved over the years so have these lights; the majority of police-issue tactical flashlights make use of LED’s to allow them an unprecedented bulb life with minimal battery usage, while using custom-designed cases which are resilient against damage and that can be physically attached to the gun itself so as to allow the officer to either have a free hand or to use both hands on the firearm.

Much like the police force, the military has a great need for specialized tactical lighting that won’t interfere with a soldier’s duties. Military tactical flashlights can come in a variety of styles, some of which are similar to those which are used by police officers while others are designed with specific uses in mind. Many military tactical flashlights can be attached to clothing instead of firearms, allowing soldiers a wider view of the area while keeping their hands free to handle their gun or other weapons. Most of these lights will have specialized filters or in some cases specialized bulbs which will allow them to illuminate an area for night vision or infrared goggles without giving away their position by the bright light.

Sportsmen and Other Outdoorsmen

Tactical flashlights and similar tactical gear aren’t just used by soldiers and police officers, of course. Many hunters, sportsmen, and other outdoorsmen will make use of this same equipment when hunting early in the mornings, letting them maneuver through wooded areas without having to carry a larger flashlight or lantern. This can be especially useful when setting up a deer stand or establishing a hunting location in low-light situations, as they will be able to have their hands free to work while still ensuring that they have enough light to see what they are doing. A number of these dedicated sportsmen will use light filters or specialized bulbs similar to those which are used by soldiers to keep from spooking wildlife; the light is changed to a shade which won’t be noticeable by deer or other animals that they may be hunting. These tactical lights can also help to prevent potential legal problems that could be caused by larger lights, as their smaller size makes them nearly impossible to use for illegally spotlighting game in order to stun it.

Tactical Gear Designed For Your Own Survival